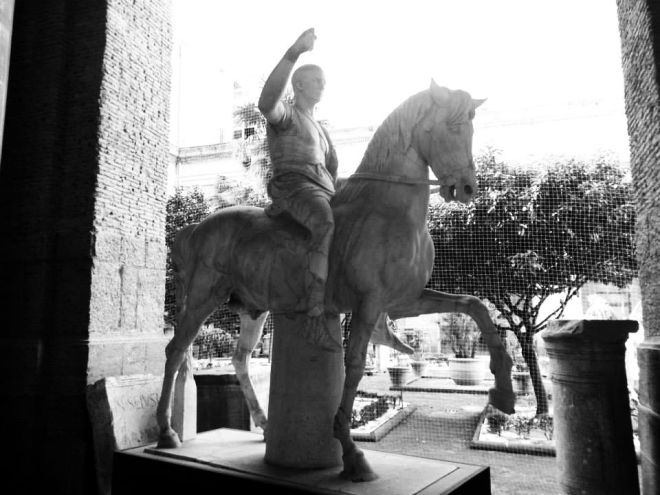 In his survey of the late Roman Empire and its rulers, Ian Hughes examines the internal as well as external causes of the dissolution of the Western Roman Empire in the 5th century. The core of the book is devoted to the imperial leadership of the last twenty years of the empire.

Cultivated amid the collapsing institutions of the Roman state was unexpectedly an impressive array of men that ascended the purple. Majorian, Anthemius, Avitus, and Glycerius were all attractive, energetic, and able rulers that under better circumstances may have established lasting dynasties.

“…it is possible to declare that as far as the (self-deluding) Senate of Rome was concerned, the only territory lost during the period when Ricimer ‘ruled’, between 456 and 472, was a small part of Hispania to the Sueves. The ‘rebellions’ of both Aegidius and Marcellinus would be seen as temporary and having little effect on the Empire overall.”

“…the large number of plagues that occurred in the fifth century; the refusal of great landowners to allow their workers to be taken for military service; and the pressure of taxation causing many citizens to abandon their loyalty to the Empire and transfer it to either local bishops or barbarian leaders, all weakened the Empire in one way or another.”

“Whenever the Empire brought overwhelming force to bear the barbarian kings could easily submit, safe in the knowledge that the troops were too valuable to be risked in battle and would soon be removed for service elsewhere in the Empire. At that point it would be possible to revert to an aggressive policy. At many key points this also explains why the barbarian kingdoms were allowed to continue, and also how they managed to pursue policies inimical to the survival of the Empire without being destroyed by Rome.”

“Yet there remains the fact that emperors who concentrated any significant resources outside Italy, such as Avitus, Majorian and Anthemius, quickly lost the affiliation of Italy and thus their rule and their lives, encouraging the alienation of non-Italians to the emperor and their change of allegiance to powerful men – usually barbarian kings – who would fulfill the role of protector once provided by the legions.”

“In Gaiseric the emperor had a political and military genius as an opponent. Gaiseric was able to successfully conquer large parts of the Western Mediterranean and repel two major Roman invasions, whilst at the same time continuing a political policy of divide and conquer that enabled him to make peace with East and West separately whilst continuing attacks on the other.”

*All excerpts have been taken from Patricians and Emperors: The Last Rulers of the Western Roman Empire, Pen and Sword.